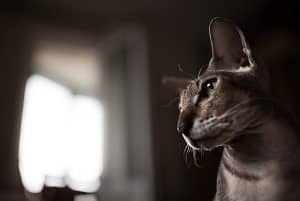 Peterbald cats and Sphynx cats are both very different from their feline counterparts as they are mostly hairless. Despite this similarity, the races have some differences. So what are the main differences between a Peterbald and Sphynx cat?

Similarities Between Peterbald and Sphynx Cats

The biggest thing these two breeds are known for is their lack of hair. Not all Peterbald cats start life hairless. But they have a hair loss gene and end up losing most of their hair. They will still have a very thin layer of hair on their body, but it’s hard to see. The hair they start out with at birth is not the hair they will have as adults.

Their coat can be in one of five standard lengths, ranging from hairless to shorthaired with normal whiskers. They may even have their version of a mustache. Sphynx cats are born without natural hair and remain so throughout their lives. Like Peterbalds, they look hairless, but they too are covered in a thin layer of hair. The “fur” of a Sphynx can be likened to peach fuzz.

Despite their lack of hair, Peterbald cats are not hypoallergenic. It is not possible to have a hypoallergenic cat. The misnomer regarding cats and allergies is that people think an allergy to cats is an allergy to their fur. This is not the case. Cat allergies are triggered by reactions to the Fel d1 protein present in their saliva, dander, or even urine. Cats with less fur tend to produce fewer allergens because they have less fur to clean. But even with their minimal fur, Peterbalds still produce some level of this allergen.

The same can be said about Sphynx cats. Although they still have less fur than Peterbalds, they are not truly hairless either. They just look that way because the “peach fuzz” fur they have is not apparent. A cat with less fur should, in theory, produce less of the allergen that triggers an attack. But that’s not a guarantee. Additionally, some humans are so sensitive to this allergen that they cannot tolerate any type of feline, even felines like these two that are considered “hairless.”

Peterbald cats share similarities with a few other cat breeds. Their body resembles the Oriental Shorthair. It is thought that they could be from this breed and later mixed with a cat with a hairless gene, or there is a faulty gene for hair loss present in some Oriental Shorthairs. Their build is very lean and muscular.

Their ears are enormous in comparison to their long heads. Their ears are also set far apart on their head. This look is similar to that of a Siamese cat. Their eyes are almost almond shaped. Their eyes tend to be close together, but some may have eyes set further apart on their face. Their tails almost look like a thin whip. The most defining feature is their oval-shaped webbed feet. These feet give the Peterbald the ability to grasp objects and open doors.

This breed is still very new to the cat world. It was first accepted into cat show championships in 2009. The breed was developed in Russia in 1994, although some places believe it may have originated in the late 80s. Regardless of when , the breed is the result of experimental breeding.

A Sphynx cat may exhibit some of these same physical characteristics, including the style of its body and the shape of its tail. Its head would be closer to the Devon Rex as opposed to a Siamese or an Oriental. He also has no whiskers or eyelashes. They still feature the same large ears, but they are closer to the cat’s head than the Peterbald. This breed is also much older. There are examples of this cat dating as far back as the 1960s. But to the untrained eye, these cats will look very similar and share many of the same physical qualities.

How long do Peterbald cats live

The life expectancy of a Peterbald is similar to that of many other cat breeds. With proper care, these cats can live between 12 and 15 years. Be sure to have your cat checked regularly and give it the right diet for its specific needs. Unlike other purebreds, these cats don’t seem to have any breed-specific health issues.

And while it’s not a health issue like heart problems or diabetes, Peterbalds like a warmer environment. If they’re too cold, they’re pretty upset and they’ll let you know. If they get too cold, it could open them up to colds and other illnesses of that nature.

The life expectancy of a Sphynx is a little different from that of its Peterbald friends. Sphynx cats can be expected to live 8 to 14 years. They have other genetic and health issues that can shorten their lifespan.

Do Sphynx Cats Have Any Health Problems

Unlike their counterparts with very few health issues, Sphynx cats have several health issues that potential owners should be aware of. Some are because of their lack of hair; others are genetic in nature.

These cats are prone to respiratory problems, especially as kittens, due to their lack of hair. Without hair, they are cold all the time, which triggers multiple health problems. There is less of it as they get older and their fuzzy hair grows. But helping these cats stay warm is key to helping them avoid this problem.

This cat is also known to have a sensitive digestive system. Owners of this cat should be careful about the food they feed their Sphynx. Many brands have developed foods specific to this cat, which should help avoid egg problems.

Other medical issues that can occur in this cat are hypertrophic cardiomyopathy, a form of heart disease, and hereditary myopathy, which impairs muscle function. Due to their lack of hair, the breed is also prone to sunburn when exposed to too much direct sunlight.

Although not a medical problem, Sphynx cats can sometimes have an odor or an oily coating on their skin. It has nothing to do with grooming or medical issues. All cats are known for their attention to grooming, and a Sphynx is no exception. But for some reason, some Sphynx cats can have quite the aroma.

To solve this problem, simply wash them as needed, usually once a week. In the early seasons of the show The Real Housewives of New Jersey, teammate Dina Manzo had a Sphynx cat named Grandma Wrinkles. Grandmother regularly took baths in the kitchen sink because it gave off an unpleasant smell from time to time. Dina likened her smell to cheese! Although not a bad smell, it is a strange smell for a cat.

Unlike their Sphynx friends, the Peterbald is not known to have any chronic or hereditary health issues. The breed is remarkably healthy. The main issues you will encounter are the issues with the Peterbalds being too cold. Since they are also hairless, they can also experience problems if they receive too much direct sunlight.

Some may confuse the Peterbald with a Sphynx cat due to the lack of hair. It would be a mistake! Although these two cats share many similarities in terms of build, they also have many differences. However, both are lovable cats who do well with families, multiple pets, and strangers. Just make sure you give them the care they need and you can enjoy your cat for many years to come.